Bibeb is the pseudonym of Elisabeth Maria Soutberg. Elisabeth is born on the 15th of June 1914 in Sloten, Noord-Holland. She was the daughter of trader Willem Jan Cornelis Soutberg (1887-1950) and Maria Anna Elisabeth van der Heijden (1891-1980). Bibeb was married to Walther Berhold Friedrich Schaper from July 6th 1937 (Medan, Dutch East Indies) to the 16th of August 1950 (The Hague). Together with Walther Schaper she had a son and a daughter. After their marriage fell apart she met George Lampe. On the 11th of July 1952 she married George. Bibeb passed away on the 18th of January 2010. 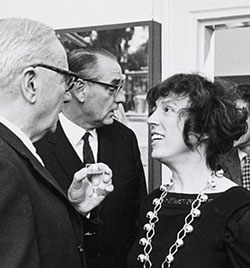 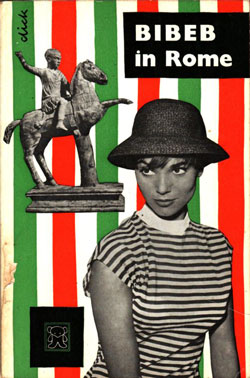 Bibeb started her journalistic career in the thirties with the Haarlem’s local newspaper. It was there she met her first husband, journalist and editor in chief Walther Schaper. In 1936 he got a job with the Sumatra Post in the Dutch East Indies, Bibeb followed him there a year later. They married in 1937. Bibeb herself also worked for the Sumatra Post: she wrote a childrens- and fashioncolumn. During World War II Bibeb and her husband spent three years in an internment camp. About her experiences in the women’s camp on Sumatra, where she had to survive together with her son, she later wrote an account to be published in Mathieu Smedts’ Den Vaderland Getrouwe (1962). After the war Bibeb, Walther and their son Wouter returned to the Netherlands, where their daughter was born. Bibeb continued her career at the Haagsch Dagblad. Walther and Bibeb’s divorced in 1950.

In that same year Bibeb met George Lampe. They came into contact through their work for the Haagsch Dagblad, where George made the illustrations to go with her articles. They married two years later. Both went to work for Vrij Nederland. George as an illustrator, editorial cartoonist and art critic and Bibeb as an interviewer. She also did reports and had a column called “Zomaarwatvrouwelijkheid” (Justsomefemininity), in which she wrote short pieces about articles in foreign magazines. Initially her pieces were only published on the women’s section and she only interviewed women. From the late fifties onwards she also interviewed men. So much as we know about Bibeb’s ‘victims’, so little is known about her. She made a deal with Vrij Nederland’s editor in chief Rinus Ferdinandusse to never open up about herself.

Bibeb is called the ‘grande dame’ of the written interview, ‘mother of all interviewers’. She won various awards: the Lucas Oomsprijs (1975), the Victorine Heftingprijs (1997) and the annual journalistic award De Tegel for her whole body of work in 2008. After her passing all necrologies were full of praise. Every author agreed that Bibeb changed the ‘portraying interview’ drastically. She had a enormous influence on the next generation of interviewers. But, according to her necrologies, no-one surpassed her. In Frits Abrahams’ words: “There was only one Bibeb. She was irreplacable. She still is.”

In total she did about 600 interviews, with people like Pablo Picasso, Brigitte Bardot, Federico Fellini and Marcello Mastroianni.