“I paint the way someone bites his fingernails”, this quote by Picasso is used by George Lampe to describe himself in 1971. That drive to paint is noticed by a reviewer of the NRC newspaper in his very first exhibition in 1941. George is just 20 years old.

George Lampe is born in Schiedam on the 30th of July 1921. In 1935 he moves to nearby The Hague. After two years of secondary school he decides to attend the Royal Academy of the Visual Arts in 1936. There George is taught by Paul Citroen, Rein Draijer and Willem Schrofer. They become lifelong friends.

Directly after the war George works as an illustrator. His first postwar exhibition is in 1947. In the early fifties Lampe’s dedication becomes more and more evident: illustrations and political collages are published in magazine Vrij Nederland, from the late fifties onwards he writes countless art critics, he works as a creative therapist for children, he designs stage sets and textiles, teaches at –and later becomes principal of– the Vrije Academie (The Hague’s art academy). In 1952 he marries renowned journalist Bibeb, with whom he has then worked with for several years. And George paints! 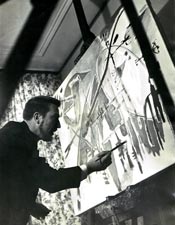 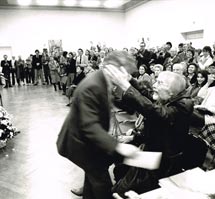 The years of his artistry are defined by enormous changes, both culturally and artistically: the world is in motion, everything is up for discussion and developments follow one after another. George, fully involved, clearly speaks his mind. In 1960 he founds artists collective Fugare. This movement is characterized by an emphasis on abstraction and experimentation. At the same time figurative tradition is not neglected.

In the late fifties George works as a teacher at the Vrije Academie. After becoming vice principal in 1964 he succeeds Livinus van den Bundt in 1968 as principal. Under his inspiring leadership the academy changes its character. Lampe wants to offer artists (professionals and amateurs) a place where they can develop themselves optimally. To enforce this ideal the academy changes its name to Psychopolis in 1970. The success comes in the following years, when the student numbers rise to 2500.

George Lampe shows his paintings and drawings in numerous exhibits home and abroad. The absolute highlight comes when he is invited by writer Jacques Damase to exhibit his work in Galerie Motte in Paris (1966). The paintings of women and horrors he displays there are a smashing success. Papers like The New York Times and Le Monde write about the exhibition. His last exhibition is held in Pulchri from December 1981 to January 1982. He was already seriously ill by then. George dies on the 18th of March 1982.

Besides being an artist George was also a writer. Because of this every painting tells a story and carries an opinion or a vision. His abstract work is characterized by an explosion of powerful events that captivates his audience. Mysterious dark landscapes where everything can happen and it’s easy to get lost in. Whichever work you look at, it’s never just a picture or simple illustration. When you look at the series of horrors and women exhibited in Paris, you’re not only captivated by the atrocities, the piercing eyes and the hidden message but also by the hint of eroticism and the relativistic accessibility. His later figurative work stands out for the seemingly simple way the distinctive characters are displayed recognizably. The line work in this late period betrays his background as an illustrator.

The artist George Lampe was inspired by the abundance of styles of the twentieth century: Cubism, Expressionism, CoBrA, Pop Art etc. He absorbed them, transformed them to his liking and then left them behind by returning to his origins: the figurative, the clear line. The experience with the various art movements eventually set him free, made his art excel, cleared his head and made him paint what he saw.

Even in later periods, where he was busy with his other activities, George continues to paint and draw. A lot of that worked is preserved. The quantity is considerable; over 200 paintings, hundreds of drawings, dozens of gouaches and an unknown number of films. In all those years not much has happened with the collection. On behalf of the exhibition the collection is preserved where needed and can thus be presented in optimal condition.